A Guide to Visiting Catholic Churches in Massachusetts

A Guide to Visiting Catholic Churches in Massachusetts

According to the latest census on religious practice, the State of Massachusetts has a considerable number of Catholics. Ranging from parades to politics, Catholicism forms an integral part of the culture of Massachusetts, which is not surprising since just under 45% of the population considers itself Catholic. For centuries, leaders of the Roman church had thought America to be a great missionary territory, besides India and China. The emphasis on America intensified with the formation of a new state, the Vatican.

Catholic churches dominate the landscape of Massachusetts. Each religious site serves its own purpose. In addition to their spiritual value, they are also extremely beautiful, each packed with history and unique in its own way.

Listed below are some of the most famous catholic churches of Massachusetts: 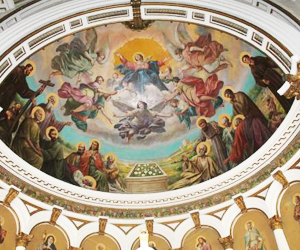 Mural on Ceiling in Leonard’s Church.

1. Leonard’s Church, Boston –
It is one of the oldest Roman Catholic churches, and the first built by dexterous Italian migrants, in the US. Located at the corner of Hanover and Prince Streets in the North End, St. Leonard has become an integral landmark in the heart of Boston. The building was designed by the famous William Holmes in the style of perfect Romanesque architecture. The interiors are resplendently done, while keeping in mind the traditional elements of Italian architecture. The colors are used well and in perfect coordination. In 1918, an influenza epidemic claimed many lives, and the children orphaned as a result were brought into St. Leonard’s Church. Later in 1968, the orphans’ home was separated from the church, and then later renamed as the Italian Home for Children. At present, this home is used to care for and treat emotionally challenged children. St Leonard’s Church also boasts of a beautiful Peace Garden and a divine St. Anthony Shrine, which is the oldest shrine in Boston. Visit this church to take in the stunning architectural beauty and layers of underlying history.

2. Cathedral of the Holy Cross, Boston –
Being the largest Roman Catholic Church, Cathedral of the Holy Cross stands tall, adding its own feature to the skyline of Boston. It is also the cathedral of the Roman Catholic Archdiocese of Boston. In terms of exterior, the cathedral is unrivalled when compared with its counterparts, like Trinity Church or Old South Church. Before the construction of this church, the entire state was largely protestant, and the foundation of this notable church building and its population sowed the seeds of Roman Catholicism. Serving both as a cathedral and a parish, the Cathedral of the Holy Cross holds three Archdiocese-wide congregations. The parish mostly includes Spanish and English-speaking congregations. The architecture resembles a Gothic Revival style, with Patrick Keely the noted architect of this magnificent monument. The building is so huge that it can easily accommodate around 2000 worshippers in the main level. In the lower level, to host smaller services, there is also an oratory. In 1927, Cathedral High School was constructed beside the church by Cardinal William O’ Connell. The school is still present adjacent to the church. 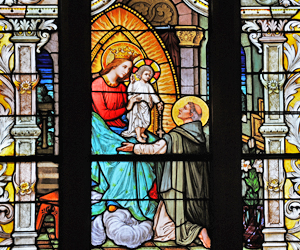 3. Stanislaus Kostka Church, Adams –
Designed by Polish immigrants in Adams, Massachusetts, St. Stanislaus Kostka Church is one of the Polish-American Roman Catholic parishes in Massachusetts. The interiors of the church will take you back in time – with a beautiful altar area, and the high ceiling casts a magical aura. The murals have been delicately and lovingly created. The stained glass windows depict stunning images of Jesus blessing his disciples. Also, on some windows you will find the Nativity and the Adoration of the Shepherds. While exploring this beautiful church, you will also find the suspended crucifix, which instantly adds a dash of drama to an otherwise subtle interior of the church.

4. Old South Church, Boston –
To witness Northern Italian Gothic architecture, you must come to Old South Church in Boston. Ornate design, luxurious interiors and spectacular exteriors have made Old South Church an object of marvel. The building was designed by Charles Amos Cummings and Williad T. Sears in a typical Gothic Revival style. When you walk inside the church, you will find a perfect mix of luxurious materials, including Italian cherry woodwork and stained glass windows.

Today, Massachusetts serves as an important center for American Catholicism. In fact, the first Catholic President, John F. Kennedy came from the Bay State. So, if you find yourself in need of spiritual nourishment and wanting to worship inside, then just walk into any of these wonderful temples to God dotting the Massachusetts’ cityscape! Beautiful and faithful community churches abound in Boston, just find one for yourself!

About the Author: Boston Catholic

Albert Joseph is a Massachusetts resident and I write about things Catholic, which includes places to visit in Boston. I am also a writer and a speaker and I have been blessed to have works published in a number of weekly journals in Massachusetts. I also maintain a popular column in a well-known magazine.